My name is Tom Grace and from March 1st I will officially take over as Course Manager at Chartridge Park Golf Club. I have been getting used to the job for the past couple of months, organising the Team and getting a few projects under way.

My intention is to communicate with Members regularly. I will tweet about what the team is doing out there and will look at creating a regular blog to inform members about changes in the industry, works carried out recently and planned for the future…

For the first edition of this blog, I would like to talk about two of the most significant changes the industry has seen for a few years, the banning of major products used to treat common turf diseases.

Fusarium is a fungus present in the soil. In damp conditions this fungus will spread and forms a ring on the turf. Left untreated, this ring will get bigger, killing the infected grass. Greens tend to be the most affected, but you may also notice it on approaches and fairways. 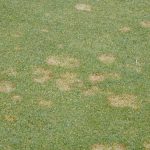 With all the greenkeeping Team trained to identify this disease, we spray a “contact fungicide” (contact, because it needs to be in contact with the fungus) as soon as the disease is spotted. At that stage, it is just a little yellow dot and most golfers will not notice it or be affected by it. The active agent in the various products on the market is Iprodione. New European legislation coming into effect this year will ban products with this agent, which means we need to look at other ways to deal with this disease.

Going forward, having discussed this issue with fellow Course Managers and industry experts, we are looking at a new approach. Through the high-risk periods, mainly Autumn and Spring, we will apply a product to the greens that will help strengthen the plant and help it deal with the fungus attacks. This programme will mean regular spraying, every fortnight to reduce the risk of the disease spreading and damaging the greens. We will have to monitor it through the year to see how effective this approach is. The downside is this approach is the increased cost due to the regular spraying regime. 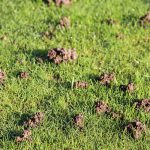 Last year saw another major change: how to treat worm cast. We have all seen worm cast in the wet season, with these little lumps of mud popping up everywhere. The main product until last year was Carbendazim, which pushed the worms into ground (not killing them) and stopping this worm cast from surfacing. With this product no longer available, we are likely to see a lot more worm cast coming through and there is unfortunately very little we can do about it. When stepped upon, they will create a muddy patch, which will remain through the winter months… You are likely to experience this wherever you play in the UK. I thought it would be important to bring this point to your attention to help you understand the reasons.

As far as projects are concerned, we have had to do a lot of work on trees around the course, following the damage created by the snow before Christmas. The weight of the snow also damaged the water tank, which also had to be fixed. Most of you will have noticed that the fencing around the 18th tee had been worked on and the “bunker” on the 5th was getting ready for turfing. The 7th tee will also be addressed shortly. Finally, I am hoping to tidy up the access through the trees from 8th to 9th tee, especially for buggies.

I am pleased to announce that Liam will be joining us from the beginning of April, from Chesham & Ley Hill. Liam worked there for 4 years and approached us to further his career. Many of you will have also met Lewis, a young apprentice. Lewis joined the Team after a conversation with the local school. We are pleased to welcome both into the Team and I look forward to helping them develop their skills and further their careers.

I wish all the Members a great 2018 golfing Season

7 Comments on “Hello From The New Course Manager”

This site uses Akismet to reduce spam. Learn how your comment data is processed.